In the Python Course #8 you learned everything about Python list, list slicing, and all the list functions that Python provides. In this article, you will learn about another sequential data type, the tuple. The data type tuple is inspired by the tuples in mathematics (Wikipedia) and in stark contrast to Python lists tuples are an immutable data type.

Pick up your free Python tuples cheat sheet from my Gumroad shop: 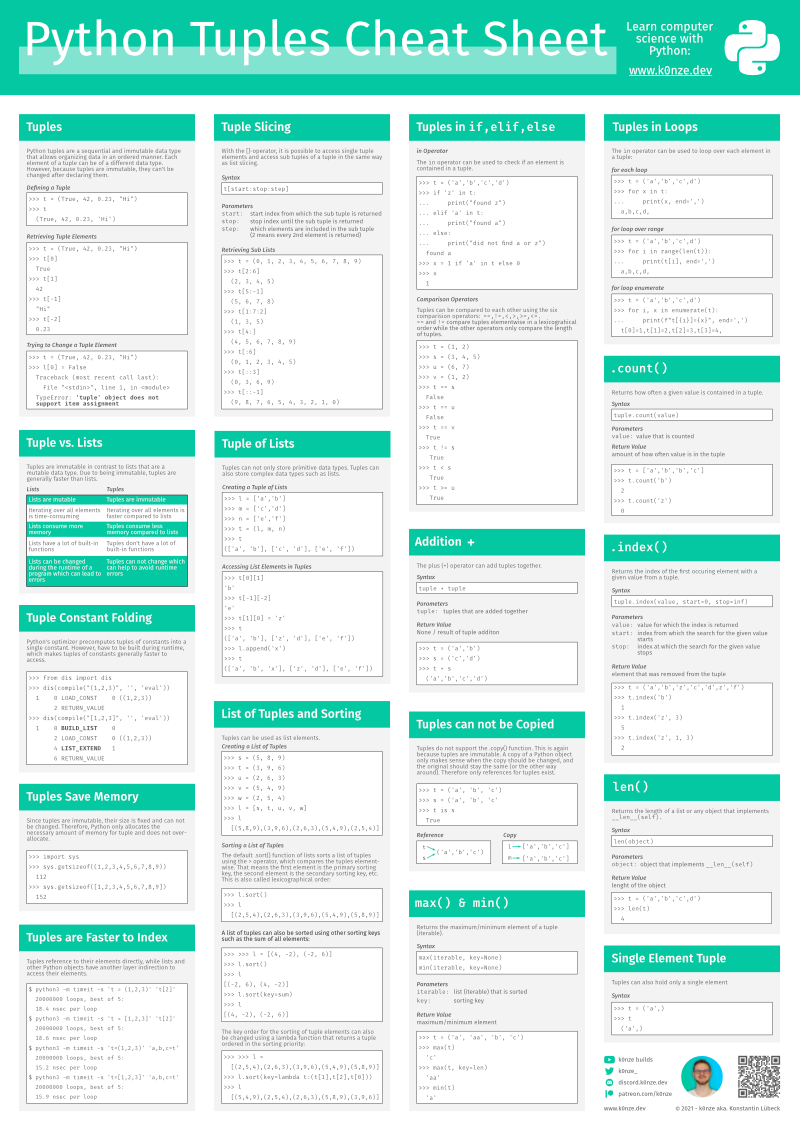 To declare a new tuple in Python, all the elements that should be included in the tuple are written in between parenthesis ( ) separated by commas:

To retrieve the elements from a tuple, the []-operator is used with the same indexing schema as in Python lists where the first element is an index 0 and the last element can be accessed with index -1:

The []-operator also allows slicing in the same way as with list (Python Course #8 on list slicing):

Unlike Python lists tuple elements can’t be changed because tuples are an immutable data type. And if you try to change a tuple element using the []-operator, you are presented with a TypeError:

Adding Python Tuples Together with +

Even though you can’t change tuples, you can add tuples together, or to be extra fancy concatenate them, to create a new tuple using +

You might ask yourself now, what is a tuple suitable for if you can’t change its values? Python tuples are generally “faster” than lists, so accessing all elements in a list takes longer than accessing all elements in a tuple. The following examples use the Python package timeit to measure the run time of a piece of code. In the first example, all elements of a list are combined into a string using the join operation. This is done 1000000 times to magnify the effect (see the parameter number). In the second part a tuple containing the same elements such as the list is used for the join operation and executed 1000000 as well:

The result of this comparison should look like this where the join over tuples is roughly 1.5 times faster than a join over a list (your numbers can vary depending on your computer hardware):

This performance comparison might look like an artificial example; however if you got a big data set and want to perform operations on it, a speedup of 1.5 could be pretty significant. Such a data set could be coordinates used for route planning in a navigation system for autonomous driving and could be stored in a list:

tuples can not only store primitive data types such as bool, int, float, or str. tuples can contain any data type you want. For example you can declare a tuple that contains lists:

By stacking the []-operator you can also change the elements contained in the lists:

This distinction between a reference and a value is crucial for understanding Python, and you will see it a lot during this Python course.

It is also possible to use a different sorting key such as the sum of all tuples elements:

Python Tuples with a Single Element

Even though it is not very useful, you can declare a tuple only containing one element. The declaration of such a one-tuple looks a bit weird because there is a comma added after the first element that is not followed by a second element:

Such as Python lists tuples also come with functions that allow you to access certain properties of a tuple.

To get the length of a tuple use the len() function:

tuples can also be compared to each other using the comparison operations: ==, !=, >, <, >=, <=. The operators compare the tuples elementwise in the lexicograhical order.

If you want to check if an element is contained in a tuple use the in operator:

Getting the minimum or maximum element of a tuple can be achieved with the min()/max() function:

To get the index of a value contained in a tuple use the .index() function:

To check how often an element is included in a tuple use .count():

As the Python tuple is an immutable data type, it doesn’t offer a lot of functions because it can not be changed after its declaration.

The .count() function concludes this article on Python tuples. Make sure to get the free Python Tuples Cheat Sheet in my Gumroad shop. If you have any questions about this article, feel free to join our Discord community to ask them over there.