In this article, you will learn about the sequential data type list. In the first article on data types you have seen the primitive data types bool, int, float and str. While str is also a sequential data type and behaves similar to a list in many ways with one key difference. A str can only store values of one kind, and those are characters such as letters and numbers. lists however, can store other types and each element can be of a different data type.

Pick up you free Python lists cheat sheet from my Gumroad shop: 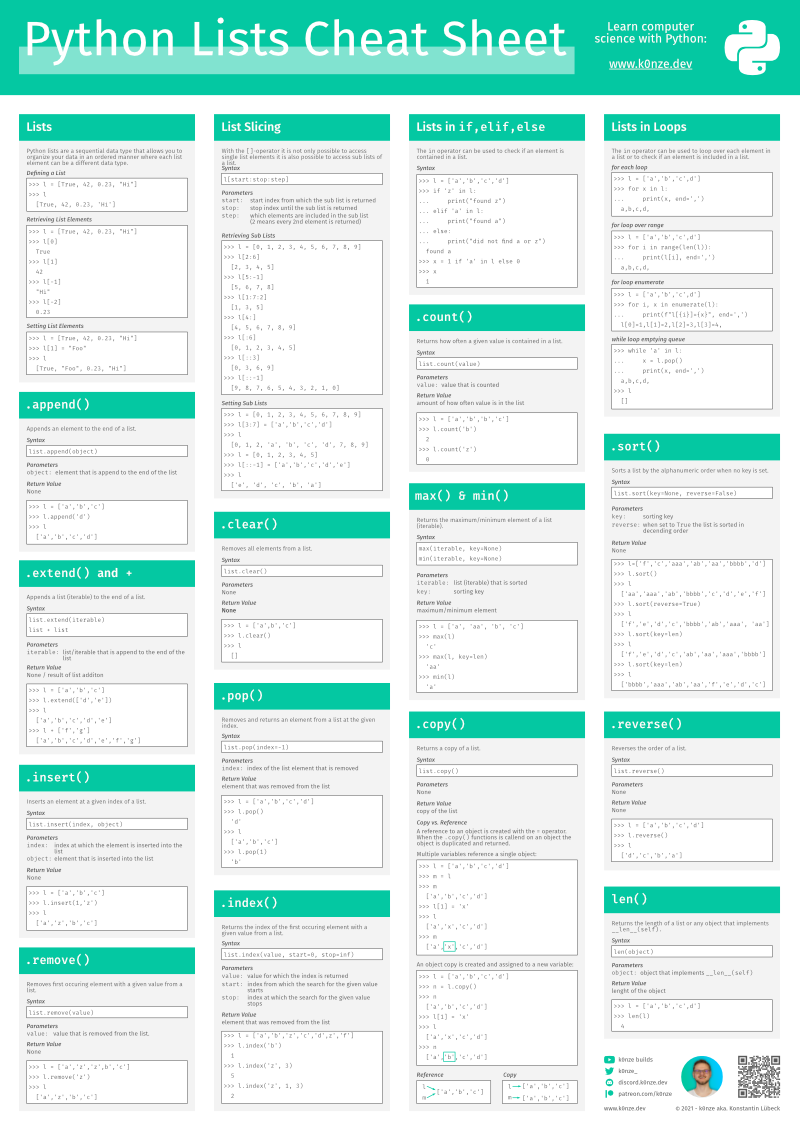 To declare a list you put all the values of a list between two brackets [] and separate them with commas ,. In the following example, the list containing a bool, int, float, and str is assigned to the variable l:

You can either access the whole list by stating the variable l or you can access individual elements with the []-operator (also called bracket-operator). Each element of a list has an index starting from the left with 0, adding 1 in every step going to the right.

To access the first element, you need to enter a 0 as an index between the brackets directly added after the variable name. For the l declared above, you would get True as a value:

To access the second element, you replace 0 with a 1 and so on. But how would you access the last element or the second last element? One solution is to use len(...). len(...) returns the length of a list as an int:

With the bracket-operator it is also possible to get a sub list that represents only a part of the original list. This is called list slicing. To make the examples a bit easier to comprehend, declare a list ` i’ where the elements have the same value as the index:

The first index (here 4) is the start index. From this index on, all elements are returned one position before the second index (here 9). If you want a list starting from a certain index until the end of the list, you don’t have to enter a second index:

And if you want a list from the beginning up to a certain index, don’t enter the first index:

It is possible to only get every n-th element of a list with list slicing by adding another colon : after the second index indicating the step width. If you only want every 3rd element of the sub list i[5:18] use the following:

And as before, you can leave out the first and second index or both if the end of your sub list should be the start or end of the original list:

You can also use variables to add elements to a list. However, the values stored in the variable will be copied over into the list element, which means when you change the value of a variable after it has been added to a list, the change won’t appear in the list:

This can be helpful if you want to represent your data in a table, for example. To access the 1st element of the 2nd list, you stack the []-operator:

You are also able to use variables as index with in the brackets:

The []-operator can also be used to assign new values to elements in a list:

But you have to be careful here because the selected slice and the list containing the new values have to be the same size to make this bulk-assignment work.

Now let’s take a close look at how to add, remove, and manipulate lists in Python

A list manipulation function is always called with a dot . after the list variable name and then stating the function’s name followed by parenthesis with the function’s parameters.

To add (or append) a single element to the end of a list use the append() function:

If you want to append several elements (a list of elements) to the end of a list use extend() or +:

To add a new element to a list at a certain index of a list while moving all current elements one index further back use insert() where the first parameter of index() is the index at which you would like to insert the new element and the second parameter is the element to insert itself. And don’t forget that the first index of a Python list is 0:

To remove an element from a list use the remove() function which will remove the first matching element in your list going from left to right:

If you want to remove all elements from a list and end up with an empty list use clear():

To figure out the index of a list element use the index() function which tells you the index of the first matching element in your list going from left to right:

Removing a list element from an arbitrary index can be done using the pop() function. pop() also returns the the element that should be removed. When passing no index to pop() the last list element will be removed and returned:

You don’t even have to implement a sorting algorithm when using Python lists. lists come with their own sorting function sort(). The list is sorted alphanumerically when no parameters are passed to sort(). You can also specify that your list should be sorted in the reversed order by passing reverse=True to sort(). And if you rather want to sort a list by the str length of the elements, you can pass key=len as an argument:

The following functions do not manipulate the list content. However, they are pretty helpful when you want to figure out specific properties of your lists

As you have already seen above when learning about the []-operator len() will return the length of a list:

If you want to know how often an element is included in a list use count():

To check if an element is inside a list you can also use Python’s in operator:

When you want to duplicate a list you have to sure if you want a reference or a copy. You can reference a list by assigning the original variable to another variable, than both variables point to the same list (you could also say share a list). When referencing a list a change using one variable will also be reflected when accessing the other variable. 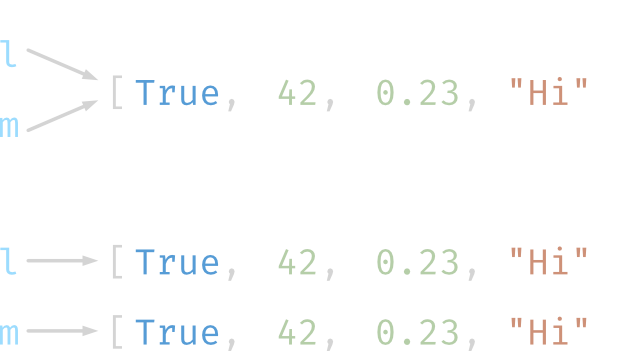 If you need want to keep the original list and only make changes in the list assigned to another variable use the .copy() function:

The copy() function concludes this video. Make sure to get the free Python Lists Cheat Sheet in my Gumroad shop. If you have any questions about this article, feel free to join our Discord community to ask them over there.

After learning about the data types list, tuple, and set let’s talk about the Python Dictionary (dict). The Python dictionary is an ordered and mutable data type that stores key-value pairs. That m...

Python Course #12: Pass by Assignment, Copy, Reference, and None

Now that the you know what mutable (e.g. lists, sets and dictionaries) and immutable data types (e.g. tuples) are it is important to talk about copies, references and None. {% youtube_embed “otWHB...

Python Course #7: Conditional Statments if, else and elif