After learning about the data types list, tuple, and set let’s talk about the Python Dictionary (dict). The Python dictionary is an ordered and mutable data type that stores key-value pairs. That means there is no index as you know them from lists and tuples; instead, there is a unique key to access an element stored in a dictionary. If you are already familiar with other programming languages, you might see a lot of similarities to associative arrays and hashmaps.

Pick up your free Python dictionaries cheat sheet from my Gumroad shop: 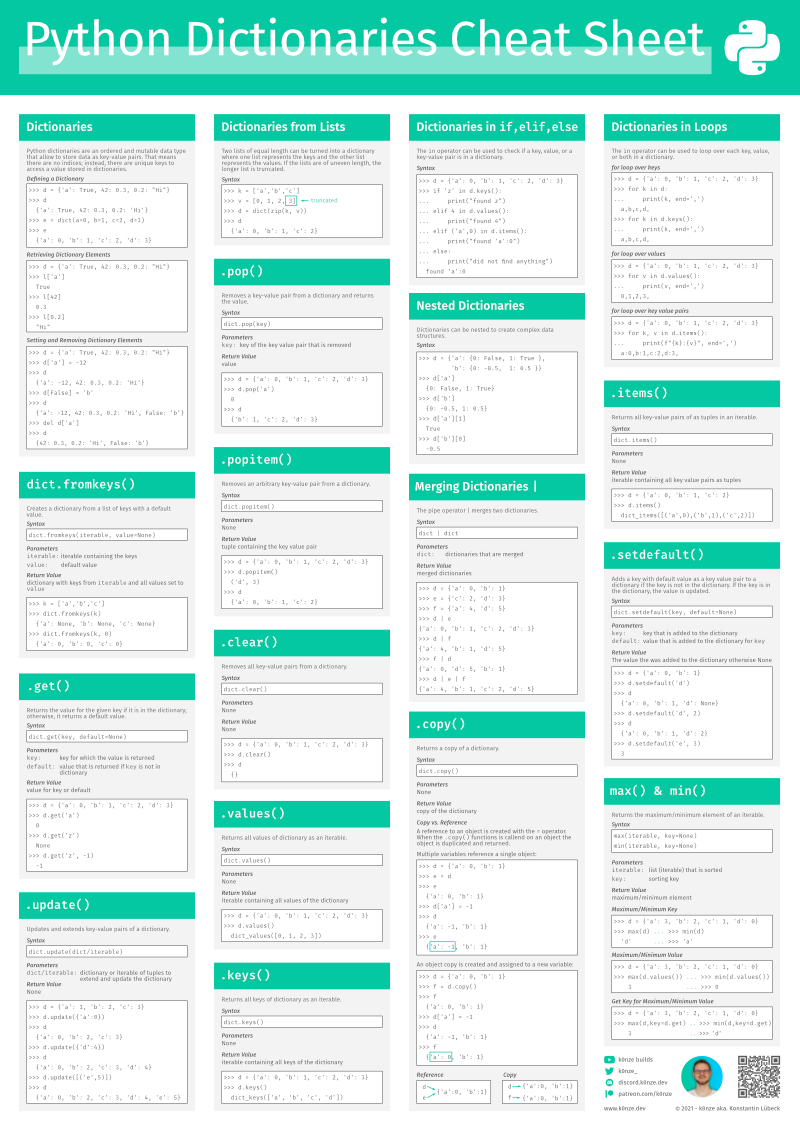 To declare a new dictionary in Python you have to provide a key and a value which are connected with a colon : and separated from other key value pairs by commas. All key value pairs are enclosed by braces { }:

The data type of the keys and the values can be mixed. However, the keys have to be unique. Because of this, dictionaries allow you to bundle complex and structured data into a single data structure.

It is also possible to pass a different default for the values by passing a second parameter the the .fromkeys() function:

There are several ways to access the data stored in a dictionary. The first and easiest way is the bracket operator []. To access a value from a Python dictionary with the []-operator, the key for the value is placed between the brackets. However, the key has to exist; otherwise, it results in a KeyError:

To add a new key value pair or update an existing one to a Python dictionary you can also use the []-operator and enter the key to update or add and follow it with a = and the value:

Removing Elements from a Python Dictionary

With the .pop() function a key value pair is removed from a dictionary and returns the value when passing the key as a parameter:

The .popitem() function has no parameters and removes an arbitrary key value pair from a dictionary and returns it as a 2-tuple:

To remove all elements from a dictionary and end up with an empty dictionary use the .clear() function:

One of Python dictionaries’ most potent properties is the ability to nest them such that the values are dictionaries themselves. This allows you to build complex data structures. For Example, suppose you got several pets and want to store information about them structured. In that case, you could use nested Python dictionaries and use stacked []-operators to access and update the data:

The .values() function returns all values in a dictionary:

Together with in operator you can check if a specific value is contained in a dictionary:

Similarly to the .values() function is the .keys() function which returns all the keys of a dictionary:

And with the in operator you can check if a key is contained in a dictionary:

You actually don’t need the .keys() function to check the existence of a key in dictionary you can just use in and it will call .keys() by default:

However, I suggest you use .keys() to make your code more readable.

You can also change the default value by passing a second parameter after the key:

Python dictionaries are mutable and therefore they provide a .copy() function which allows you to create a copy of dictionary:

The .copy() function concludes this article on Python dictionaries. Make sure to get the free Python Sets Cheat Sheet in my Gumroad shop. If you have any questions about this article, feel free to join our Discord community to ask them over there.

Estimate Gas in Ethereum Transactions with Python web3 and brownie