With the knowledge of Python functions and algorithms, we are ready to write our first sorting algorithm and also take a closer look at how fast it runs.

What is a Sorting Algorithm

When thinking about sorting numbers, the easiest way that comes to mind is to start at the second element and check if it is less than the first. If that is the case, the second element will be moved to the front, and the previous first element is moved one position to the back. The sub-list of the first and second elements is sorted, and the remainder of the list remains unsorted. Next, we pick the third element, and if you have to place it in front, in the middle, or the back of the sub-list consisting of the first and the second element. When we have found the correct spot, all elements greater than the selected third are moved one position to the back. Now the sub-list of the first three elements is sorted. And you might have already guessed it this is repeated until no elements are left in the unsorted part of the list. The following figure depicts a concrete example of how this sorting algorithm works: 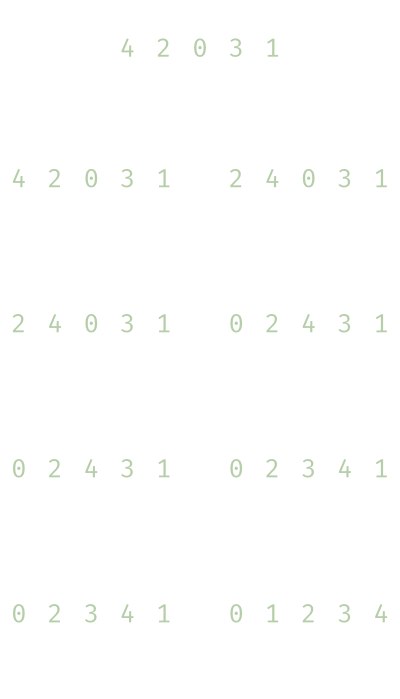 This kind of sorting algorithm is called insertion sort because every new element is inserted at the correct position of the sorted sub-list at the front. Insertion sort is a so-called in-place sorting algorithm which means that the sorting doesn’t happen in a second list; it takes place in the original list that is to be sorted.

After looking at how the insertion sort algorithm works, we want to implement it in Python. As a first step, we are going to write a new function that checks if a list is sorted such that we have a quick way to verify that the sorting algorithm implementation is correct:

The function is_sorted returns False if two consecutive elements of the input list l violate the <= comparison criterion. If all elements in the list l conform to the comparison criterion, the l is sorted, and True is returned. When implementing this, make sure that range(...) only goes to the second last element of l as in each iteration, two elements are accessed at position i and i+1. When range(...) would go to the last element of the l the last iteration would fail because l[i+1] tries to access an element outside of the l.

With a way to check if a list is sorted, we can move on to implement insertion sort in Python. When looking back at the figure, the algorithm picks an element in every step, which we will call key from now on, finds the correct position in the sorted sub-list in the front, and then moves all elements greater than key one position to the back. In the sub-list [0:1], the key is the element at position 0 and does not have to be moved; therefore, we are going to iterate over all element of the list starting from position 1 and pick those elements as key. Then we reverse iterate over the sorted sub-list to find the correct position for key and simultaneously move the elements greater than the key one element to the back. When we encounter an element in the sorted sub-list that is less than or equal to key we have found the correct position of key and can place it at this position:

Now a list can be passed to insertion_sort(...), and the list will be sorted when it is finished.

Thinking in sums might not be super intuitive; therefore let us add some print statements to the insertion_sort(...) function and let it run with a list in reverse order visualize it:

The output of the code above looks like this, where the asterisks * denote how often the while loop body was executed for a given j

Now we can add all annotations at the end of the lines togehter to get the platform independent run time for our insertion sort implementation depending on the input length:

And When looking at that we first need to clean it up a little bit:

Now it looks a little bit cleaner. However, we still got the sums to convert into closed forms. But with the Gauß summation, this is not pretty easy. The Gauß summation states:

Now the sum has the same from as the first sum and we can replace it with the result from above:

With the sum in closed from we replace the sums now separate the different powers of \(n\) from each other:

This result shows us that our insertion sort algorithm has to execute \(n^2\) steps in the worst-case depending on the input length \(n\). We can also measure this effect by measuring the runtime for different inputs lengths and configurations: 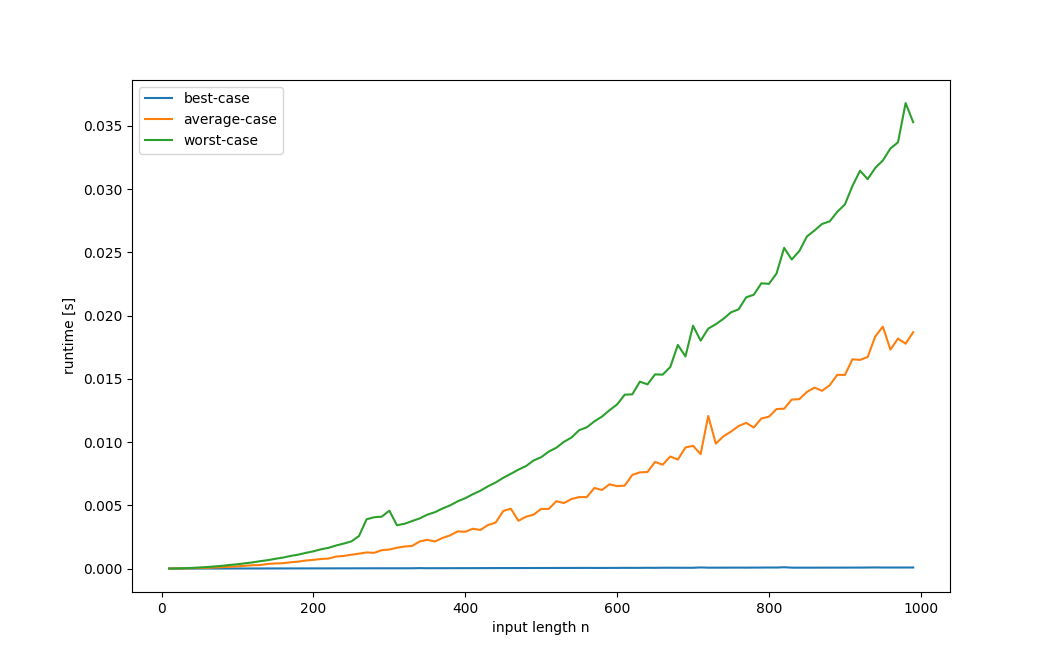 In the plot above, we can see the quadratic growth in runtime in the worst-case. The peaks in the graph are caused by the operating system, which we aren’t able to control at such a fine level.

There is an even more sophisticated method of determining and comparing runtimes of different algorithms with each other that is called the big-O method, which I’m going to cover in another article.

Python Course #17: What is an Algorithm